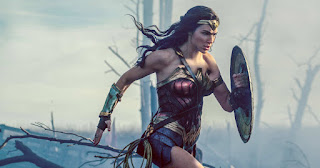 This summer, the blockbuster hit at the theaters is the movie "Wonder Woman." I happen to see it twice.  I will say that the first time left me energized. But seeing it a second time with my daughter, got me thinking.

I don't want to give away the plot, but what I will say about the story line is Diana does not yet know what she has been created to do. Her mother was fearful that if she ever found out that her purpose was to fight, she might lose her.  One of the endearing lines that her mother says to her as she is leaving the safe haven was, "You have been my greatest joy, but today you are my greatest sorrow." As I sat next to my daughter now that she is an adult, I could feel her mother's heart.  Letting your children go as they walk out their purpose is bitter sweet. I'm sure God must have felt this way when He sent His one and only Son to earth to save us.

But as Diana begins to discover her strength and courage, her destiny begins to unfold. Her mother didn't want her to know that she was created as "a weapon" against the god of war. Only she had the power to defeat him.  Her mother never wanted her to be exposed to evil, but as her purpose would have it, she finds herself wanting to stop evil in the world.

The cinematography was spectacular with all the choreography and special effects. But there were key weapons and words used in this movie that seemed to parallel with what the Word of God says. While watching her "get after it" I believe the Holy Spirit impressed on  me the real power we women have in the Holy Spirit. She carried a magic lasso that was truth, a shield and a sword, wrist bands of power, and upon her head a kind of crown that gave her authority. You are probably getting where I'm going with this. She was dressed to some degree in the full armor of God (Ephesians 6:10-17)  She discovered that one has to "believe in" and "love" in order to conquer evil.  1 John 3:23 says "And this is his command: to believe in the name of his Son, Jesus Christ, and to love one another as he commanded us."


As a women of God, we too are like "Wonder Women." We were fearfully and wonderfully made (Psalm 139:14)! When you think about it, in the very beginning, the woman (Eve) was the first to stand before the one who is evil and would bring sin and death to the earth God had created (Genesis 3). But, the climax of this story we are living in, is that Jesus conquered sin and death because of God's love for us (John 3:16). First Corinthians 15:53-56 says "For the perishable must clothe itself with the imperishable, and the mortal with immortality. 54 When the perishable has been clothed with the imperishable, and the mortal with immortality, then the saying that is written will come true: 'Death has been swallowed up in victory.'55 'Where, O death, is your victory? Where, O death, is your sting?'56 The sting of death is sin, and the power of sin is the law. 57 But thanks be to God! He gives us the victory through our Lord Jesus Christ."

We have been called to be warriors not worriers, especially we women.  We have adopted worry as a badge of honor. It is a lie.  The truth is we have been crowned with glory and honor, Psalm 8:5 says "You (God) have made them (us) a little lower than the angels and crowned them with glory and honor." We've been given authority in Jesus name. In Luke 10:19 Jesus says "I have given you authority to trample on snakes and scorpions and to overcome all the power of the enemy; nothing will harm you." In order to do this God gave us spiritual armor that we are to put on daily. Ephesians 6:11 says "Put on the full armor of God, so that you can take your stand against the devil’s schemes." Lastly, one of our most important weapons is prayer.  Ephesians 6:18 says "And pray in the Spirit on all occasions with all kinds of prayers and requests. With this in mind, be alert and always keep on praying for all the Lord’s people." It is time for us to rise up to the purpose we have been created for. To carry out God's purpose of redemption of mankind.  Matthew 28:19 & 20 Jesus tells us "Therefore go and make disciples of all nations, baptizing them in the name of the Father and of the Son and of the Holy Spirit, 20 and teaching them to obey everything I have commanded you. And surely I am with you always, to the very end of the age.”

Wonder Woman was fearless, bold and always ready to face the enemy. If we put our complete trust and hope in God, we too can be Women of Wonder. Others will "wonder" where our strength comes from. It comes for the power of the Holy Spirit in us as it says in Romans 15:13 "May the God of hope fill you with all joy and peace as you trust in him, so that you may overflow with hope by the power of the Holy Spirit." Jesus already won the battle that gave us the victory, all we have to do is "live it out"! We have been created in God's image (Genesis 1:27) and ultimately be transformed into Christ's likeness (Philippians 3:20-21).

In closing, going back to what I said about what I felt in my heart seeing this with my daughter, it's my responsibility to train her to be a wonder woman. The only way I can do that is if I am living like one. I want to encourage you today, if you are a follower of Jesus Christ, then lets unite and work together to prepare for that glorious day when Jesus returns for his Bride. If you are reading this and not yet a follower of Jesus, then you can become one right now.  All you have to do is surrender your life to him, ask for forgiveness and believe on the name of Jesus Christ who saves! We are victorious in Him who saves!