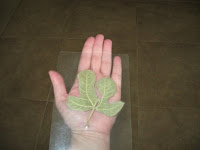 Last night, one of the last things I said to Jeff before we went to sleep was what I read yesterday in my devotions. It resonated so much in my spirit that it was the first thing on my mind this morning. It was about the fig tree in Mark chapter 11: 12-14.

It reads, "The next day as they were leaving Bethany, Jesus was hungry. 13 Seeing in the distance a fig tree in leaf, he went to find out if it had any fruit. When he reach it, he found nothing but leaves, because it was not the season for figs. 14 Then he said to the tree, 'May no one ever eat fruit from you again.' And his disciples hear him say it."

Why did that have such an impact on me? I think it is because five verses later which according to the scripture was the next day, that fig tree was mentioned again. Very rarely do you see something picked back up again in the scripture if at all. Mark 11:20 and 21 says, "In the morning, as they went along, they saw the fig tree withered from the roots. 21 Peter remembered and said Jesus, 'Rabbi, look! the fig tree you cursed has withered!'"

There is a very important message here, that I think we often skip over. Sometimes we interpret the cursed fig as the power of Jesus words or even the power of the tongue. But there is more here than just what we say. Let's take a look at it from another angle.

According to my study reference in my NIV Study Bible, it says that fig trees were common and inexpensive. It takes them three years to mature and produce fruit. Then when they do produce fruit, it is only in late spring and early autumn. If one would read this, it would make you wonder then why Jesus was frustrated with it. Did Jesus show some impatience here because he was hungry? No, maybe Jesus was giving his disciples an illustration of why it is important to bear fruit in and out of season. You never know who might be walking by and running on empty and needing some "fruit of the spirit."

19The acts of the sinful nature are obvious: sexual immorality, impurity and debauchery; 20idolatry and witchcraft; hatred, discord, jealousy, fits of rage, selfish ambition, dissensions, factions 21and envy; drunkenness, orgies, and the like. I warn you, as I did before, that those who live like this will not inherit the kingdom of God.22But the fruit of the Spirit is love, joy, peace, patience, kindness, goodness, faithfulness, 23gentleness and self-control. Against such things there is no law. 24Those who belong to Christ Jesus have crucified the sinful nature with its passions and desires. 25Since we live by the Spirit, let us keep in step with the Spirit."
What I find interesting about this particular idea of the fig tree that Jesus cursed, is that the first time the word "fig" and "cursed" were mentioned in the Bible, was back in the third chapter of Genesis. Maybe Jesus used this illustration to remind them that fruitlessness began with the fall of man. That it has always been an issue since God cursed the soil. After Adam and Eve had sinned and had eaten "the fruit" from the tree of the knowledge of good and evil, they clothed themselves with fig leaves sewn together. (Genesis 3:7) Just a thought, it never says what the fruit was on the tree, but what if it was figs and they used the leaves hoping it would "cover" their mistake? Then God shows up questioning them as to who told them they were naked. (Genesis 3:11) Then God cursed the serpent. (Genesis 3:14) But more importantly God said to Adam, "Cursed is the ground because of you; through painful toil you will eat of it all the days of your life. 18 It will produce thorns and thistles for you, and you will eat the plants of the field. 19 By the sweat of your brow you will eat your food until you return to the ground, since from it you were taken; for dust you are and to dust you will return." (Genesis 3:17-19)

I wonder if the reason this "cursing of the fig tree" was mentioned the next day was because maybe God wanted to highlight the importance of bearing fruit. Why as followers of Jesus we need to be bearing the fruit of the Spirit all the time. As I mentioned before, you never know who will need it. Think of yourself like a bowl of fruit on the kitchen counter. Always available for whoever is hungry.

When we were in Israel, I was amazed at the many crops of fruit trees throughout the region. There were all kinds of crops. Unlike the U.S. where we can only grow citrus in Florida and Southern California, grapes in Northern California, apples in Washington, etc. The fruit crops were everywhere. Even in the desert regions they grew dates. Fruit is served at every meal, which is why I believe Paul paralleled the characteristics of the Spirit to fruit. We need to serve them up all the time. There are so many things stirring in my spirit about this that I could go on and on. But I'll stop and leave you with this final thought. Above is a picture of a fig leaf that I brought home from a tree in the Old City of Jerusalem. When Jeff pulled it from the tree, it was as large as his hand. When we got back to the hotel and I pulled it out of my bag, it had shrunk considerably. As you can see it is half the size of my hand. When I got home from Israel, I laminated it to keep as a reminder of what a cursed life is like. A cursed life is limited. The only thing that can bring a life of abundance and fruitfulness is abiding with Jesus (John 15:5) and living by the Spirit which will produce a life that will be Christ-like.