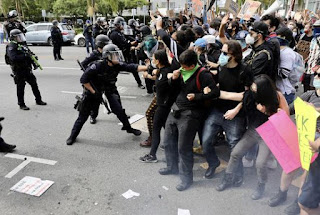 In light of what we've seen around the U.S. these past few days, I thought I would re-post this blog I wrote 10 years ago.  Things were rumbling then with unrest as it was during an election when we were voting on laws.  This year we are heading for another election and 2020 has definitely birthed some of the unrest that like the lava underneath the earth's surface that has begun to erupt. This past week the volcano started spouting and it is all because of the anger and rage that is burning within mankind. There are wounds of people in this country that have never been healed. There is only one who can bring healing and wholeness to the U.S. and He's the One who we have removed. We've taken God out of everything! We see now in our recent quarantine of COVID19, that the Church is non-essential. People don't see the need and yet we are in a time that we need the love of Jesus more than ever.


The following thoughts are what was on my heart 10 years ago. I feel that they are more relevant today, than they were then. So much has changed for the worst and has happened in the past 10 years, yet at the same time, we have not resolved any of the issues that are still burning in the hearts of man today.

In recent years, our elections have been very interesting. Some of the propositions we have had on our ballots would have never been considered as early as10 years ago. The television ads that seem to run endlessly during the weeks prior to an election can be a bit confusing. Most of the time I believe the proposition ads talk in circles as to confuse the voter. As followers of Jesus, we shouldn't base our decisions necessarily on moral issues, but on the Kingdom of God principles. What does God's Word say about the things man's law is trying to pass. It would seem that it is "lawfulness" against "lawlessness" and "order" against "disorder."

This week we read 2 Thessalonians chapter 2 and the title of this chapter in my NIV Bible is "The Man of Lawlessness." Verses 1- 12 says, "Now, dear brothers and sisters, let us clarify some things about the coming of our Lord Jesus Christ and how we will be gathered to meet him. 2 Don’t be so easily shaken or alarmed by those who say that the day of the Lord has already begun. Don’t believe them, even if they claim to have had a spiritual vision, a revelation, or a letter supposedly from us. 3 Don’t be fooled by what they say. For that day will not come until there is a great rebellion against God and the man of lawlessness is revealed—the one who brings destruction. 4 He will exalt himself and defy everything that people call god and every object of worship. He will even sit in the temple of God, claiming that he himself is God.


5 Don’t you remember that I told you about all this when I was with you? 6 And you know what is holding him back, for he can be revealed only when his time comes. 7 For this lawlessness is already at work secretly, and it will remain secret until the one who is holding it back steps out of the way. 8 Then the man of lawlessness will be revealed, but the Lord Jesus will kill him with the breath of his mouth and destroy him by the splendor of his coming.

9 This man will come to do the work of Satan with counterfeit power and signs and miracles. 10 He will use every kind of evil deception to fool those on their way to destruction, because they refuse to love and accept the truth that would save them. 11 So God will cause them to be greatly deceived, and they will believe these lies. 12 Then they will be condemned for enjoying evil rather than believing the truth."

Verse 12 hits the nail on the head, so to speak. Mankind today would rather enjoy evil living rather than believing the truth. The most controversial propositions are not about freedom as much as they are selfish and considered "rebellion" in the eyes of God. Rebellion is the same as witchcraft so these issues are definitely "lawlessness." They are all about instant gratification. We talk about the future of our country, yet we really don't think about the side effects it will have on people in future of our country.

It is so disheartening to see our country so divided right now. We are in the midst of a political civil war. Laws are given to promote order and safety. There is still a small majority who vote for lawfulness and order. But the more we promote rebellion that majority is losing voters with every election. It is like some underworld movie Arnold Swartzenegger or Sylvester Stallone would play in. It is a world full of bitter, angry, hateful, and murderous citizens.

In the Book of Lamentations Jeremiah is mourning the destruction of Jerusalem from Babylon. It says "Jerusalem has sinned greatly, so she has been tossed away like a filthy rag. All who once honored her now despise her, for they have seen her stripped naked and humiliated. All she can do is groan and hide her face. 9 She defiled herself with immorality and gave no thought to her future. Now she lies in the gutter with no one to lift her out. “Lord, see my misery,” she cries. “The enemy has triumphed.”10 The enemy has plundered her completely, taking every precious thing she owns. She has seen foreigners violate her sacred Temple, the place the Lord had forbidden them to enter. 11 Her people groan as they search for bread. They have sold their treasures for food to stay alive. “O Lord, look,” she mourns, “and see how I am despised." (Lamentations 1:8-11, NLT) This passage of scripture is so fitting for the current condition as a country.

Having the right to choose is what makes the United States of America great. But when the majority of the people are choosing out of a rebellious heart, it can be a dangerous place. It is said that history repeats itself and this isn't the first time a country has been teetering on the side of destruction. The disturbing part about all of this is that it is all done in the name of peace. Unfortunately, the heart of rebellion is not peace. It is wickedness which is the cause of lawlessness and disorder. It is a counterfeit peace that is truly the spirit of anti-Christ. 1 Corinthians 14:33 says, "For God is not a God of disorder but of peace." That is why He sent His son Jesus to the earth. Jesus is the Prince of Peace (Isaiah 9:6). Only His peace can bring law and order.
Posted by Jayme at 7:34 AM No comments: