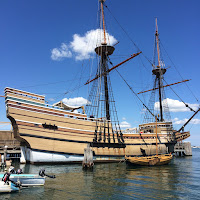 This week we will gather around our tables with so much food, that we will be eating leftovers for the next few days. In our family, we go around the table and share our personal "thanks" for people and things that happened over the past year. I remember as a child my sister and I would dress up like pilgrims and put on plays for the family. I always loved thanksgiving because it was the beginning of the most wonderful time of the year.
This summer we had the opportunity to see the Mayflower and Plymouth rock. It was a little disappointing compared to what I remember reading in the history books in school. The actual Mayflower was really not much larger than a large yacht. The accommodations were definitely not your luxury cruise line and no bathrooms! The Mayflower set sail across the Atlantic ocean from England to the new world in 1620.  The pilgrims wanted to leave England so they could be free to worship as they wanted.  I learned so much this trip about the pilgrims and who they were. 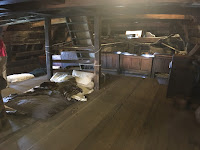 The pilgrims had left England earlier and moved to Holland for a short time because they were unhappy with the way the Church of England had become.  They wanted to be free to worship as they had and left the country in order to do so.  The King of England had requested them to return and nothing had changed. They were under such oppression, they were willing to venture off to an unknown land.  If they had only known what the trip ahead of them would be like.  It is thought that the King wanted them to go to the new world to stake out some land. It's hard to believe things could have been so terrible that they were willing to risk the unknown.


For three months they lived on this tiny boat carrying 102 passengers and about 25-30 crew and 3 of them were pregnant women.  One baby was born while on their voyage.  I never thought about it, but they traveled during hurricane season!  They didn't have doppler radar back then to help them navigate weather.  I can't even imagine what it was like sharing a small boat with all those other people.  No privacy and no dramamine!


I can't imagine that life could have been so bad that they would rather sail across a big ocean just for religious freedom. It must have been pretty difficult. It's sad to think how often we take our religious freedom for granted. When they arrived, they set foot on Plymouth rock, which now there is not much left of it. The rock broke when they moved it to the center of town as a reminder of what they endured and the reward. After centuries of visitors, this little rock is all that is left. 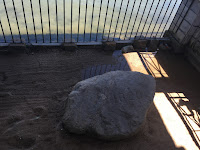 This story reminded me of a passage in the Psalms that we read every Thanksgiving eve.  It's Psalm 107.  It begins with "Give thanks to the Lord, for he is good; his love endures forever.2 Let the redeemed of the Lord tell their story— those he redeemed from the hand of the foe,3 those he gathered from the lands, from east and west, from north and south." (Psalm 107:1-3)  I wonder if the Pilgrims thought about this passage while crossing the endless ocean. Later in the passage, it says "Some went out on the sea in ships; they were merchants on the mighty waters.24 They saw the works of the Lord, his wonderful deeds in the deep. 25 For he spoke and stirred up a tempest that lifted high the waves. 26 They mounted up to the heavens and went down to the depths; in their peril their courage melted away. 27  They reeled and staggered like drunkards; they were at their wits’ end.28 Then they cried out to the Lord in their trouble, and he brought them out of their distress.29 He stilled the storm to a whisper; the waves of the sea were hushed. 30 They were glad when it grew calm, and he guided them to their desired haven." (Psalm 107:23-30) 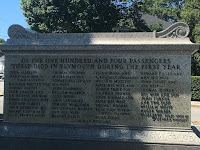 I am sure, after 3 months on the sea, they were beyond grateful to see this new land that greeted them.  It wasn't long after they had arrived the harsh winter came and diseases took the lives of most of the people. All that they gone through to get to the new world and then they didn't live to see their dreams fulfilled.

This story touched me as I listened to the lady at the tourist center tell me all of this.  I had no idea and to be honest never really thought much about it.  But it has changed my perspective of what people are willing to endure for freedom. 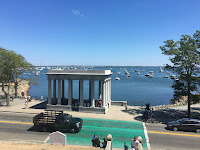 Jesus did that for us when he came to earth as a man.  He stepped down from Heaven to the depths of the earth.  He calmed the wind and seas. He healed the sick. He saved the lost. Then he was willing to go to the cross to bring us out of our distress.  Because of his willingness to give his life for us, we will one day be in our desired haven called Heaven and gather at His table for the Wedding Supper of the Lamb and give Him thanks! (Revelation 19:9) Oh what a Thanksgiving day that will be! One that will last for eternity!

Happy Thanksgiving to you and your family and may God Bless America!