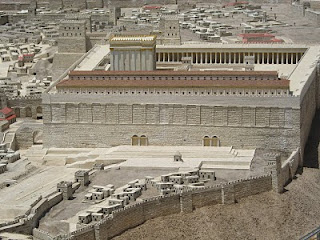 ln the Iate 80's there was a television show called "The Wonder Years" starring Fred Savage. It was about a preteen boy and what he thought about and experienced during his teen years. I thought that would be a good title for today's devotional from Luke 2. I wonder what Jesus was like at 12? I remember when my son was 12. Where he was emotionally and in his maturity was not even what I imagine Jesus to be at 12.

The story of Jesus at the temple when he was 12 years old is found in Luke 2:41-52. It reads like this: 41 Every year Jesus’ parents went to Jerusalem for the Passover festival. 42 When Jesus was twelve years old, they attended the festival as usual. 43 After the celebration was over, they started home to Nazareth, but Jesus stayed behind in Jerusalem. His parents didn’t miss him at first, 44 because they assumed he was among the other travelers. But when he didn’t show up that evening, they started looking for him among their relatives and friends.

45 When they couldn’t find him, they went back to Jerusalem to search for him there. 46 Three days later they finally discovered him in the Temple, sitting among the religious teachers, listening to them and asking questions. 47 All who heard him were amazed at his understanding and his answers. (Above photo is from the Model City in Jerusalem of the Temple during the second Temple period. What it would have looked like when Jesus was there).
48 His parents didn’t know what to think. “Son,” his mother said to him, “why have you done this to us? Your father and I have been frantic, searching for you everywhere.”
49 “But why did you need to search?” he asked. “Didn’t you know that I must be in my Father’s house?” 50 But they didn’t understand what he meant.
51 Then he returned to Nazareth with them and was obedient to them. And his mother stored all these things in her heart.
52 Jesus grew in wisdom and in stature and in favor with God and all the people. (NLT)
I can't even imagine what Mary and Joseph must have felt. The sick feeling of losing him, the guilt they must have felt as parents, not double checking that he was with them, let alone that they didn't even realize he was missing.

I wonder what kind of boy Jesus must have been. He must have been quiet mannered, probably an observer, a gentle spirit, but very confident, intelligent and obviously mature. I wonder what Mary must have been thinking when she realized he was not with them? That feeling is not a good one. When my son was 12 years old, he would have never done that because he barely lets me go outside of the house without fearing that I've left him alone. He's my homing pigeon. The scripture says it took them 3 days to find him. Probably because the last place they would have expected to find him was in the temple courts with the religious teachers. I'm sure the the average boy may have been playing ball with the neighborhood kids or whatever boys did in those days. The scripture says his parents didn't know what to think or as the NIV translates, they were astonished (Luke 2:48).

As any parent, even though they may have been angry, but probably a bit proud to find their son interacting with these men. Its says that Jesus was listening and asking questions. I wonder what kind of questions he was asking. I do wish the scripture had mentioned that. I wonder if the religious teachers were wondering what a 12 year old boy was doing hanging around them. But I think the key action here that Jesus did, was listen.

When they finally found him, his mother asked him why he did that to them? Jesus responded, "Why did you have to search? Didn't you know I'd be in my Father's house?" It said they didn't understand. Had Joseph and Mary taken so much of the parenting role in Jesus' life that they had forgotten whose son he was? Did they forget that God was ordering every step of Jesus' life? That Jesus was God in the flesh? I also find it interesting that it was three days. Having been to the Old City, it would not have taken three days to find him. If you've been to the Old City you would know that it would not have taken three days. Interesting that it was three days from Jesus' death and resurrection. On the third day he arose and was found by his "family." Jesus at 12 missing for three days was a snapshot of what was to come.

I wonder when they found Jesus at the temple, if his countenance was different after having been in his Father's house? Did they not recognize him? Maybe they actually passed him up a few times not expecting to find him there. Much like the women in the garden that morning of his resurrection or the men on the road to Emmaus after Jesus had been with his Father in His Heavenly home.

The scripture does not mention anymore about Jesus' teen years or young adult life. Unlike Moses, David and other heroes of the faith, who have biographies of their youth, there is no information on Jesus as a young man other than what the end of this passage says. It says that he grew in wisdom, stature and favor with God and people (Luke 2:52).

Let me ask this question? Would you know the difference if Jesus was missing in your own life for a few days? Do you find yourself anxious? Do you find yourself scattered? Do you find yourself searching for something? Maybe you are not convinced that Jesus makes that much of a difference in your life. I sure can tell when I haven't spent time with him. I am anxious, scattered and lost. I don't know if Mary truly understood the 12 year old that she was raising. The scripture says that Mary stored these things in her heart (Luke 2:51). She was his mother. We are the ones who manage to get lost. The truth is Jesus will never leave you nor forsake you (Hebrews 13:5). You never have to wonder about that.