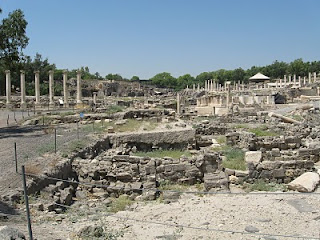 "A bone to pick" is an expression often used when there is a disagreement or dispute that needs to be settled. That was the first thing that came to my mind reading this passage in 2 Samuel. The passage reads:

1 There was a famine during David’s reign that lasted for three years, so David asked the Lord about it. And the Lord said, “The famine has come because Saul and his family are guilty of murdering the Gibeonites.”

2 So the king summoned the Gibeonites. They were not part of Israel but were all that was left of the nation of the Amorites. The people of Israel had sworn not to kill them, but Saul, in his zeal for Israel and Judah, had tried to wipe them out. 3 David asked them, “What can I do for you? How can I make amends so that you will bless the Lord’s people again?”

4 “Well, money can’t settle this matter between us and the family of Saul,” the Gibeonites replied. “Neither can we demand the life of anyone in Israel.”

5 Then they replied, “It was Saul who planned to destroy us, to keep us from having any place at all in the territory of Israel. 6 So let seven of Saul’s sons be handed over to us, and we will execute them before the Lord at Gibeon, on the mountain of the Lord.”

“All right,” the king said, “I will do it.” 7 The king spared Jonathan’s son Mephibosheth,who was Saul’s grandson, because of the oath David and Jonathan had sworn before the Lord. 8 But he gave them Saul’s two sons Armoni and Mephibosheth, whose mother was Rizpah daughter of Aiah. He also gave them the five sons of Saul’s daughter Merab, the wife of Adriel son of Barzillai from Meholah. 9 The men of Gibeon executed them on the mountain before the Lord. So all seven of them died together at the beginning of the barley harvest.

10 Then Rizpah daughter of Aiah, the mother of two of the men, spread burlap on a rock and stayed there the entire harvest season. She prevented the scavenger birds from tearing at their bodies during the day and stopped wild animals from eating them at night. 11 When David learned what Rizpah, Saul’s concubine, had done, 12 he went to the people of Jabesh-gilead and retrieved the bones of Saul and his son Jonathan. (When the Philistines had killed Saul and Jonathan on Mount Gilboa, the people of Jabesh-gilead stole their bodies from the public square of Beth-shan, where the Philistines had hung them.) 13 So David obtained the bones of Saul and Jonathan, as well as the bones of the men the Gibeonites had executed.

14 Then the king ordered that they bury the bones in the tomb of Kish, Saul’s father, at the town of Zela in the land of Benjamin. After that, God ended the famine in the land. 2 Samuel 21:1-14 (New Living Translation)

In reading this passage, David and all of Israel is facing a season of famine. After three years, he finally decides to go to God. When he finds out it was from something that had happened during Saul's reign, he goes to make amends. He recovers Saul's and Jonathan's bones and puts them where they belong, in the tomb of his father. The place where the dead belong, buried. But not just in any tomb, the place where he should have been buried all along. The scriptures says that after all that was done, God ended the famine.

What I am trying to point out here is, how often do we neglect something that we should have dealt with when "it" was alive? Saul was supposed to give the Gibeonites some land, but instead his "flesh" got in the way and he decided to try and kill them off. Not part of God's plan. There was now a "curse" not only on Saul's family, but on the Israelites too because Saul did not follow God's direction.

When we make mistakes and make choices out of God's will, could this possibly bring a "curse" on our lives? (I think I've seen too many "Pirates of the Caribbean" movies.) I see people all the time forfeit a life of blessing because they refuse to "bury" the bones of the past. They refuse to settle that dispute in their heart and it leads them to a spiritual famine. Often times, others pay for our disobedience to the Lord, especially our family members. It says, in this case, it was seven of Saul's sons. Not to mention Rizpah who was a "family member" who grieved this loss. She guarded the bodies to make sure they stayed in tact.

Rizpah is like the loved ones in our lives who suffer from mistakes that we make. Personally, I know of people who carry around "unburied bones" of other family members that have been dead for years. It's a generational curse. It then becomes apart of the heritage of the family. Not something to be proud of. It brings a weariness and a lack of blessing. And they wonder why they can't seem to get that break through the need.

The scripture says that when David finally put Saul's and Jonathan's bones in the tomb of Saul's father, Kish, the "curse" lifted. The famine ended. We too need to bury those "bones" from our past. When we do we end the famine in our spirit. This gives us more opportunity for blessings to come.

Take sometime to examine your life. Have you been living in a spiritual famine? How long has it been? David waited three years to ask God. Have you asked God why and what is causing the famine? What bones are laying around that keep you from living in abundant life?
Posted by Jayme at 9:50 AM