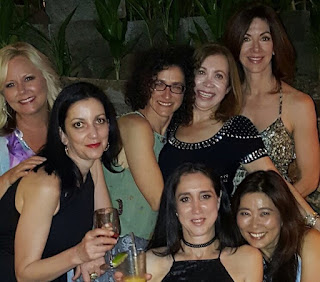 I have always thought Ruth's story was a nice story, kind of a Cinderella type story. But this time rather than look at it through the eyes of "the fair maiden meeting her prince charming," I read it this time as an example of an authentic relationship between women. I like to call it a "real-ationship." As I was reading it I discovered the four building blocks to a R.E.A.L. women friendship. R.E.A.L. being the acronym for respect (1 Peter 2:17), encouragement (1 Thessalonians 5:11), accountability (Proverbs 27:17) and love (1 Peter 4:8).

The first block being respect. In Chapter 1 verses 15-18 it says "'Look,' said Naomi, 'your sister-in-law is going back to her people and her gods. Go back with her.' 16 But Ruth replied, 'Don't urge me to leave you or to turn back from you. Where you go I will go, and where you stay I will stay. Your people will be my people and your God my God. 17 Where you die I will die, and there I will be buried. May the Lord deal with me, bit ever so severely, if anything but death separates you and me.' When Naomi realized that Ruth was determined to go with her, she stopped urging her." Ruth obviously respected Naomi for the kind of life she lived. She respected her enough to want to follow her to a foreign land. In return, Naomi respected Ruth enough to allow her to go with her.

The second block is encouragement which is found in Chapter 2. Beginning with verse 2, Ruth says to Naomi, "Let me go to he fields and pick up the leftover grain behind anyone in whose eyes I find favor." Naomi said to her, "Go ahead, my daughter." 3 So she went out and began to glean in the fields behind the harvesters. As it turned out, she found herself working in the field belonging to Boaz, who was from the clan of Elimelech." This man Boaz was a relative of Naomi's late husband. Most of know the end of the story. If Naomi had not encouraged Ruth to go to the field to pick the up the leftover grain, she would have never met Boaz. I look at encouragement as a form of blessing. Naomi was giving Ruth her blessing by encouraging her to go.

The pillar of accountability is found in the second portion of Chapter 2. After Ruth returns from spending the day in he fields, Naomi says beginning in verse 19 "Where did you glean today? Where did you work?" Blessed be the man who took notice of you!" She again encouraged Ruth to stay close to him. All those questions are the stepping stones to accountability. One might think Naomi was being nosey, but if she hadn't asked those questions, she would have never known that Ruth had been working in Boaz's field, who was her close relative.

In Chapter 3, Naomi tells Ruth to dress up in her finest clothes and put on perfume. To go to the threshing floor and wait until Boaz falls asleep and lie down at his feet. I believe this is another example of respect. Respect requires trust. Ruth had to trust Naomi enough to do this. Personally, I don't know if I could have done that. It's one thing to get all dressed up, but to lie down at the feet of a man you barely know would seem a bit odd. Yet Ruth did not even question Naomi's plan. She responded in verse 5 by saying "I will do whatever you say."

The last portion of Chapter 3 is another time when accountability is found. After Ruth returns from the threshing floor, Naomi she asks her how it went and what happened? Like most of us women, we want details.

But Chapter 4 clearly speaks of the fourth pillar of love. After Boaz marries Ruth in verse 14 it says "The women said to Naomi: 'Praise be to the Lord, who this day has not left you without a kinsman-redeemer. May he become famous throughout Israel! 15 He will renew our life and sustain you in your old age. Four your daughter-in-law, who loves you and who is better to you than seven sons has given him birth." Because of the real-ationship between these two women, not only one of them, but both of them were blessed far beyond their wildest dreams. Ruth found a husband and Naomi was now a grandma which I'm sure she never thought would come to pass since she lost both of her sons.

As I've thought about this for the past several days, I also thought about the idea of gleaning. I believe there is some hidden message there as well from God to us. Ruth was not an Israelite, she was a Moabite, a gentile. By allowing Naomi to lead her, who was an Israelite, Ruth found God and married an Israelite for a second time. But what I believe is symbolic here is the fact that after they had harvested the grain, she would go behind and pick up the left overs. It says she returned to Naomi with an ephah which is about 22 liters. Thats quite a bit of grain. Okay, stay with me here. Jesus referred to himself as the "bread of life". What is bread made from? Grain. Ruth didn't get the first round of grain, she got the left overs. By the time Jesus came on the seen, the Religious Leaders had been doing their jobs for so long, they missed "the bread of life." Jesus was giving the first portion to his people. So who got to receive the left overs when He wasn't recognized by the Pharisees? The Gentiles. It was after Jesus ascended to Heaven that the Gospel got out to the new group of people who wanted to hear about "the bread of life." Thus we now have Christians. When Jesus ascended to Heaven, he told the disciples to go and make disciples of all nations which is Jesus leaving the left over grain to feed the gentiles. (Matthew 28:19). To this day, people every where have the opportunity to glean from the life and death of Jesus.

Take some time today to think and pray about the real-ationships you have. Are they built on the foundation of Jesus and are the walls of respect, encouragement, accountability and love holding those friendships secure? God didn't mean for us to live our lives alone. God gave us the gift of relationships. Also, think about those relationships that are not yet built on Jesus, are you leaving some "grain" behind that they might taste and see that the Lord is good? When we are in healthy relationships, they help shape who we are. When we are in Godly relationships they keep us pressing to become more like Jesus.
Posted by Jayme at 6:00 AM