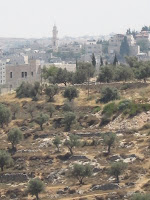 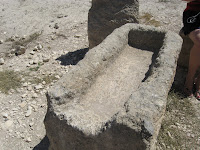 In most one year Bible reading plans, the last few weeks of December we read in Revelation about the "second" coming of Jesus while we celebrate His "first" coming. This just proves how God does everything intentionally. There are so many clues pointing to Jesus as the Messiah.

As I was reading Revelation I had my own revelation about the "first" and "second" coming of Jesus. In Revelation Jesus is called the Lamb of God. "Then I saw a Lamb, looking as if it had been slain, standing in the center of the throne, encircled by the four living creatures and the elders. He had seven horns and seven eyes, which are the seven spirits of God sent out into all the earth." Revelation 5:6. In Revelation 5:12 the heavenly creatures sang in a loud voice, "Worthy is the Lamb, who was slain, to receive power and wealth and wisdom and strength and honor and glory and praise!"

This sounds so familiar to what the shepherds heard that night in their fields in Bethlehem (Fields pictured above). Bethlehem was the place where the sheep for the Passover sacrifice were raised. Think about this, the sacrificial lambs were bred there in Bethlehem. Jesus was born in Bethlehem. He was the Lamb of God (John 1:29, John 1:36). They could only use a lamb without blemish or defect for the Passover sacrifice. 1 Peter 1:19 says "the precious blood of Christ, a lamb without blemish or defect." 1 Corinthians 5:7 says Jesus is the Passover lamb that was sacrificed.

When the Angels appeared to the shepherds this is what they said, "Today in the town of David a Savior has been born to you; he is Christ the Lord. 12This will be a sign to you: You will find a baby wrapped in cloths and lying in a manger." 13Suddenly a great company of the heavenly host appeared with the angel, praising God and saying, 14"Glory to God in the highest, and on earth peace to men on whom his favor rests."(Luke 2:11-14) The key word for me here is sign. There are many signs pointing now to Jesus as the Messiah and who He is in this picture of the nativity.

First, Jesus being the Lamb of God, and being born in a stable and lying in a manger. When we were in Israel, our tour guide showed us what a typical manger would have looked like when we were in Meggido. It's not made out of wood like we see in nativity pictures today. It was carved out of stone. (See the photo above) This would have held the grain or hay the animals would have eaten as well as holding the water they would have drunk. Now, think about this, here's the Lamb of God born in the stable, but he was lying in a food/drink trough. What did Jesus say he was? Bread of Life and Living Water. And what is bread made from? Grain. Jesus said we'd never go hungry or thirsty again in John 4. But, Revelation 7:14-17 says, "I answered, "Sir, you know."And he said, "These are they who have come out of the great tribulation; they have washed their robes and made them white in the blood of the Lamb. 15Therefore,"they are before the throne of God and serve him day and night in his temple; and he who sits on the throne will spread his tent over them.

16Never again will they hunger; never again will they thirst. The sun will not beat upon them,
nor any scorching heat. 17For the Lamb at the center of the throne will be their shepherd; he will lead them to springs of living water. And God will wipe away every tear from their eyes."
Another revelation to me was who came to visit him. We often talk about the shepherds being the lowliest of the people. His "first" group of visitors were shepherds. What else is Jesus referred to? He's the Good Shepherd. (John 10:11,) His first introduction to mankind is that he came as a shepherd. The "first" coming.

The "second" set of visitors were kings. What is Jesus coming back as the "second" time he appears to mankind? As the King of kings and Lord of lords. Revelation 19:11-16:says, "I saw heaven standing open and there before me was a white horse, whose rider is called Faithful and True. With justice he judges and makes war. 12His eyes are like blazing fire, and on his head are many crowns. He has a name written on him that no one knows but he himself. 13He is dressed in a robe dipped in blood, and his name is the Word of God. 14The armies of heaven were following him, riding on white horses and dressed in fine linen, white and clean. 15Out of his mouth comes a sharp sword with which to strike down the nations. "He will rule them with an iron scepter."He treads the winepress of the fury of the wrath of God Almighty. 16On his robe and on his thigh he has this name written: KING OF KINGS AND LORD OF LORDS. " If this isn't another sign pointing to Jesus as the Messiah.

We see the picture of the Heavenly Hosts in the field greeting the shepherds with the glad tidings of great joy. Only a selected few had the opportunity of experiencing that. But the "second" time around the whole world will experience the glad tidings of great joy. The kind of joy where there will be no more tears. The Bible says that shepherds and kings bowed and worshiped the child lying in a manger. When Jesus appears to us for the second time, we will all have the opportunity to bow and worship him and this time he will take his rightful place on the throne in the temple. The very temple that as a Lamb of God he was sacrificed.

The book of Revelation has several references to stars. All of them being a symbol. The other morning, I believe the Lord gave me my own revelation to the Star of Bethlehem.

When God called Abraham, He promised him that his offspring would be as many as the stars in the sky (Genesis 15:5). I'm sure, just like the Passover story is told each year at Passover, this was one of those family tree story's that was passed down from generation to generation. This was another sign for the Hebrew people to keep their eyes open for the Messiah. In Numbers 24:17 the scripture says, "I see him, but not now; I behold him, but not near. A star will come out of Jacob; a scepter will rise out of Israel. He will crush the foreheads of Moab, the skulls of all the people of Sheth." God used a star to direct the Magi to the baby (Matthew 2). I truly believe this was the sign to His people that their Messiah had come. Like every family, why after all this time would he show up now. Instead, it was the foreigners to went looking for him.

There is no doubt in my mind that all of these are signs pointing to Jesus as the Messiah. God is pretty creative and I would not put it passed the Creator of Life to have had some fun including these clues for us. Especially for those who are skeptical and have to have proof that Jesus is who God says he is. Watch for the signs. It won't be long before he makes his grand entrance for the second time, but this time, it won't be a select few who will see him. We all will get to see him come to earth this time. Revelation 22:20 says, "Yes, I am coming soon.” Amen. Come, Lord Jesus."