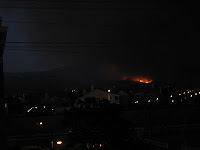 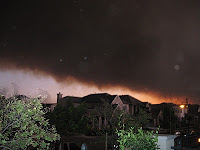 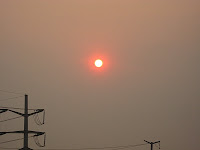 California is no stranger to fire. In the fall of 2007, it was a critical time in . The state was literally on fire. There were fires in Northern California as well as Southern California. The smell of smoke was intense. Many of us were glued to the news for several days.

One night in October, as I was doing up the last few dishes from dinner, I could see a red-orange glow outside my window. A few nights earlier, when the fire began, my son, and I sat in my upstairs window watching the tiny spark on the hillside grow into a raging fire. For days, the smoke hung over our heads like a canopy shading us from the sun. It was an eerie feeling. Although we were at least 20 miles or more from the location, the house was filled with the smell of smoke as though we had just built a bonfire on our patio. Every night I would watch the fire jump from hillside to hillside. During the day I could see the charred ground and the cloud of smoke it would leave in its wake.

I am describing all of this to you to draw a picture of how powerful our tongues can be. James 3:5 & 6 says, "Likewise, the tongue is a small part of the body, but it makes great boasts. Consider what a great forest is set on fire by a small spark. 6 The tongue also is a fire, a world of evil among the parts of the body. It corrupts the whole body, sets the whole course of one’s life on fire, and is itself set on fire by hell." I watched, what looked like a tiny spark, ignite into a blaze. What an illustrated picture of what words can do. Not only does a fire damage everything in its path, but even those who are watching from afar, have to deal with the residue the ash leaves behind. There is stench of smoke that lingers in the air, even when the fire has passed. Much like damaging words that are spoken. They can destroy everything in their path and more often than not, observers can become victims by default.

Job 41 talks about the leviathan and how difficult he is to tame. 19 Firebrands stream from his mouth; sparks of fire shoot out. 20 Smoke pours from his nostrils as from a boiling pot over a fire of reeds. 21 His breath sets coals ablaze, and flames dart from his mouth. That picture reminds me of the giant cobra on the Indiana Jones ride at . Often the tongue of man is even more difficult to tame than the leviathan.

I truly don't think man understands the power of words. Think about this, God spoke the universe into existence. That is pretty powerful! Of course the enemy wants to use words to retaliate, so he uses people to speak against one another. James 3:9&10 says, "With the tongue we praise our Lord and Father, and with it we curse human beings, who have been made in God’s likeness. 10 Out of the same mouth come praise and cursing. My brothers and sisters, this should not be." Satan is also known as the accuser. He tries to use us to accuse and speak words of harm to each other. Isaiah 54:17 says "no weapon forged against you will prevail, and you will refute every tongue that accuses you. This is the heritage of the servants of the LORD, and this is their vindication from me,” declares the LORD." We are included in this heritage. Imagine what would happen if we spoke praise and blessing not only to God, but with and to each other. I bet we'd see fire. Like the fire that rested on the heads of the disciples in Acts (Acts 2:3&4). What kind of blaze would that start? A blaze of Glory that could not be contained!

I pray that we would get the destructive fire from our mouths 100% contained. I pray that a blowing wind would spark the fire of the Holy Spirit in us. That it would set a blaze of Glory that would never be put out.